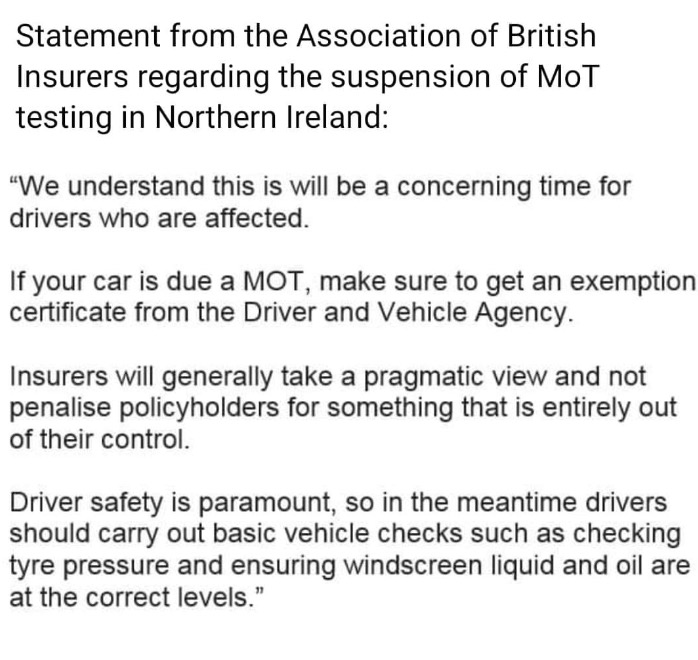 We do have (effectively) government MOT testing places here Alan, a Ambulance station tests all mine, and trucks use DVSA rented test bases.
Cheers Kev

Join Date: Feb 2007
Location: Spain + Germany
My Motorhome: Four Winds RV
Posts: 29,290
Thanks: 201
Thanked 558 Times in 519 Posts
Yes Kev. It's all we have and perhaps as Terry says they are generally prompt these days but there were times when there were three month waiting lists, and that would not have been accepted as a reason for driving without MoT. Hard to keep a business running with that kind of waiting time.

Depending on the day they'd also fail you for ridiculous things. We didn't have advisories. I had a van failed for a tear in the drivers seat covering. It was maybe two or three inches long. They just as soon have failed you and left you needing a full retest for something like that. Another time they failed my car, an old Alfa Spider because they front number plate was not vertical. The front number plate was never vertical on those cars, like the E Type it was across the slope of the front panel, still perfectly visible for all that. It had passed for years with the stick on number plate it had been delivered with when new. I got the local Alfa dealer to challenge it and they weren't having it. Hanging a vertical number plate on it was an act of vandalism but I did it just for the day and in subsequent years it was never mentioned again.

They couldn't test my Lotus Elise because it was too low to go on to their brake testers. In the end I just took it to Scotland every year and had it done there.

Not a helpful bunch in my opinion. Officious. Perhaps not so much now, I don't know.
Brexiters. It's your sh1t now. Whatever happens nationally and internationally you own it. I wish you luck. I think you're going to need all you can get and then some. Friday 13th December 2019.
erneboy is online now
Quote Quick Reply
post #14 of 16 (permalink) Old 29-01-2020, 01:16
jiwawa
Senior Member

Join Date: Apr 2007
Location: Norfolk
Posts: 5,087
Thanks: 178
Thanked 225 Times in 220 Posts
We have noticed a definite improvement of MOT testing stations in our area at least. They now are given an hour and it is timed from when they log the car onto a computer to when they log the car out. This, it seems, makes them do a thorough test. I always insist that Chris takes the cars in as he knows what he is talking about and they accept that he will not give them the work even if they do find something that needs attention.
patp is online now
Quote Quick Reply
post #16 of 16 (permalink) Old 29-01-2020, 13:43 Thread Starter
dghr272
Senior Member

Join Date: Jun 2012
Location: Carrickfergus NI
My Motorhome: Arapaho
Posts: 7,012
Thanks: 248
Thanked 580 Times in 542 Posts
Personal Aire
Quote:
Originally Posted by jiwawa View Post
No, I think Terry's right Alan, they're a whole lot better than they used to be.

And I too prefer our system to the GB system which, it seems to me, is much more open to abuse.
Yes Jean much better now in terms of fully computerised as you enter, have found the staff helpful and happy to explain the readings as you progress through the test. Indeed two years ago I was getting handbrake failure readings, the tester called another guy and retested until acceptable readings were captured stating, "these Alko hand brakes brakes are a pain". Unlike previous tests they do now list Minor Defects that may require attention but not a fail in main test.

As for ordinary car testing I still feel like an expectant father when asked to side on the sidelines whilst it goes a the lift.

Terry
The people who passed off a pair of gloves as *two* items of PPE may not be entirely honest.