I might have done the same G
Cheers Kev
Semper ubi, Sub ubi
Link to my build thread on MHF
Link to my self build pictures

Join Date: Jun 2006
Location: The Berwyn mountains in the paradise of Powys
My Motorhome: Hymer S740 on Sprinter 616 (2004)
Posts: 14,610
Thanks: 282
Thanked 331 Times in 301 Posts
Quote:
Originally Posted by GMJ View Post
Actually there is a right twunt of a bloke who lives in the village who is also a MH'er unfortunately so it is tempting...

Myself and Mrs GMJ went for a walk after lunch today and when we heard a vehicle behind us we stopped walking to let it through as there was a car parked and it would have been a little tight. The twunt barrelled through in his MH without even a wave of acknowledgement. As his window was open i shouted "Don't mention it"! Next he stopped and rammed it into reverse to where we were and belligerently asked if I had made a comment. I suggested that it would have been nice to perhaps wave as thanks for letting him through, to which he drove off!! I followed up with "Have a nice day" as I couldn't help myself

as to tyres, to run at a pressure purely to prolong the life of tyres makes no sense for me on a MH. I have never changed my tyres because they have been bald. I've changed them because of age though.
erneboy and GMJ like this.
Glandwr is offline
Quote Quick Reply
post #15 of 37 (permalink) Old 15-10-2021, 11:52
KeithChesterfield
Senior Member

Join Date: Mar 2010
Location: Guess!
My Motorhome: Pilote Reference P716
Posts: 3,389
Thanks: 58
Thanked 160 Times in 110 Posts
Personal Aire
When we first had a Motorhome about a decade ago I topped the pressures up to 80psi as stated on the door frame.
It was like riding on a 'corrugated' surface and it needed extra adhesive for the dentures and barnet to keep them secure.
After seeing the Continental and Tyre Safe recommendations and pressure charts I had the axles weighed, took the Tyre charts seriously and reduced the pressures accordingly.
The 'ride' was considerable less bumpy, smoother, more comfortable and no noticeable difference in handling.
With the tyres I have fitted on my currrent Motorhome - Continental (225/70 R 15C 112/110) - on my Pilote on a Ducato base and with front axle 1560kg and rear axle 1940kg, confirmed fully laden by a weighbridge, the recommended pressures are 47psi front and 61psi rear.

Regarding the Tyre Depot blokes advice  I would imagine many of his clients are White Van Man drivers or even heavier vehicles who do a considerable yearly mileage at fast speed and they aren't bothered about a few more rattles and wear to the vehicle as long as the tyres don't wear too quickly.

As said earlier most Motorhomers don't change tyres because of wear but usually because they have exceeded the age at which tyres should be replaced  often between 5 and 7 years.

We rarely do many miles in one go, except for the sprint to Eurotunnel, driving as comfortably as possible, and I wouldn't imagine many of you drive 'ell for leather very often, so I prefer the 'softer' ride of the Motorhome compared to the higher inflation and harsher ride.

Everyone to their own ..

erneboy likes this.
For Videos of the Aires we've used, Eurotunnel journeys and many other more obscure Videos have a look at - www.youtube.com/user/KeithChesterfield

For Recommended Vets in Europe have a look at - https://www.google.com/maps/d/viewer?msa=0&mid=zTPBDq9Df4L4.kSm3eLuvVb2g
KeithChesterfield is offline
Quote Quick Reply
post #16 of 37 (permalink) Old 15-10-2021, 12:02
Pudsey_Bear
Senior Member

What about possible insurance complications should an incident become related to low tyre pressure?
Cheers Kev
Semper ubi, Sub ubi
Link to my build thread on MHF
Link to my self build pictures

Join Date: Feb 2007
Location: Spain + Germany
My Motorhome: Four Winds RV
Posts: 33,999
Thanks: 365
Thanked 769 Times in 713 Posts
If the pressure has been recommended by the tyre manufacturer the insurers will be happy with that.
KeithChesterfield likes this.
Brexiters. It's your sh1t now. Whatever happens nationally and internationally you own it. I wish you luck. I think you're going to need all you can get and then some. Friday 13th December 2019.
erneboy is offline
Quote Quick Reply
post #18 of 37 (permalink) Old 15-10-2021, 16:00
Cherekee
Senior Member

Join Date: May 2005
Location: Guernsey
My Motorhome: Rapido 883F
Posts: 475
Thanks: 4
Thanked 15 Times in 12 Posts
I have been running mine at 51 (47psi + 10% as advised by Continental Tech) Front & 55 psi Rear for the last 13 years. Not been a problem for me summer or winter with my Continental 4 Season tyres. Try getting out of a snow pack with 80 psi in and you will be able to sell tickets. I will not even mention the aquaplaning performance reduction at 80 PSI either.

The Michelin response to the FB member. 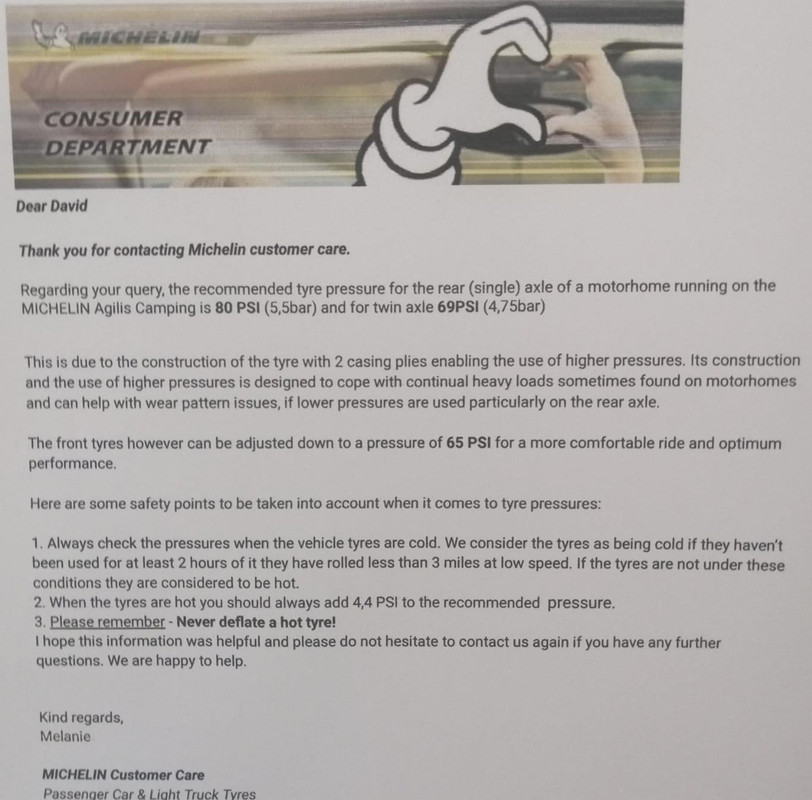 marchie likes this.
BREXIT built on deceit delivered by liars

Hmm, I have Agilis tyres, not even considering 80 PSI
KeithChesterfield likes this.
Cheers Kev
Semper ubi, Sub ubi
Link to my build thread on MHF
Link to my self build pictures